A great opportunity to share our pride in the school

The second week after all the children returned to school, we received a call from Ofsted, explaining that they would be doing a virtual monitoring visit.  I think all the teachers were surprised by the way we all felt about it - we were genuinely a little bit excited because we relished the opportunity to talk about all the things we have been doing as a school through lockdown, and to celebrate the great work that parents had done when children were learning at home.

Both inspectors were inspiring and knowledgeable.  They spoke to subject leaders about the curriculum and in verbal feedback to governors, praised their subject knowledge, enthusiasm and management of their subjects.  Responses from parents' view were fantastic. We are incredibly grateful to our school community for sharing responses so quickly.  Overnight we had one hundred responses.  Overwhelmingly positive.  It took the inspectors quite some time to read through the 95 written comments that they had received!  However, what probably impressed inspectors the most, was the children.  They interviewed six children (remotely on 'Teams' of course, with the supervision of a teacher).  The children were articulate, the range of books they had read was really impressive and their enthusiasm for reading was inspiring! They also talked about politics (a subject we begin to teach more about in upper key stage 2) and shared their different views.

This was a remote monitoring visit and would have only converted to a full inspection if there had been concerns about the school. As a monitoring visit it cannot change the school judgement from 2017, but we are looking forward to a full Ofsted which we hope will come in September of this year.

Across the school we are learning to talk about music, using technical language to describe what we hear.  Here's an example from Year 5 about a piece by Shostakovich entitled 'Lady Macbeth of Mtsensk' (this is linked to their work on Macbeth). 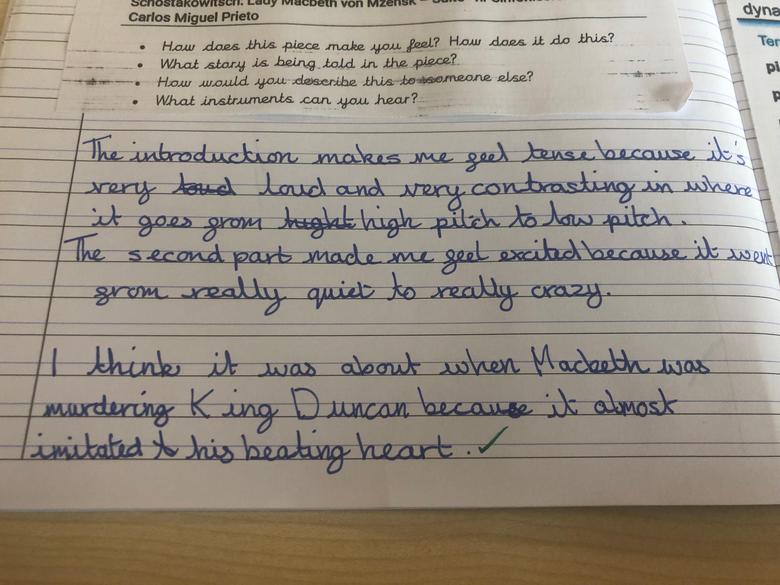 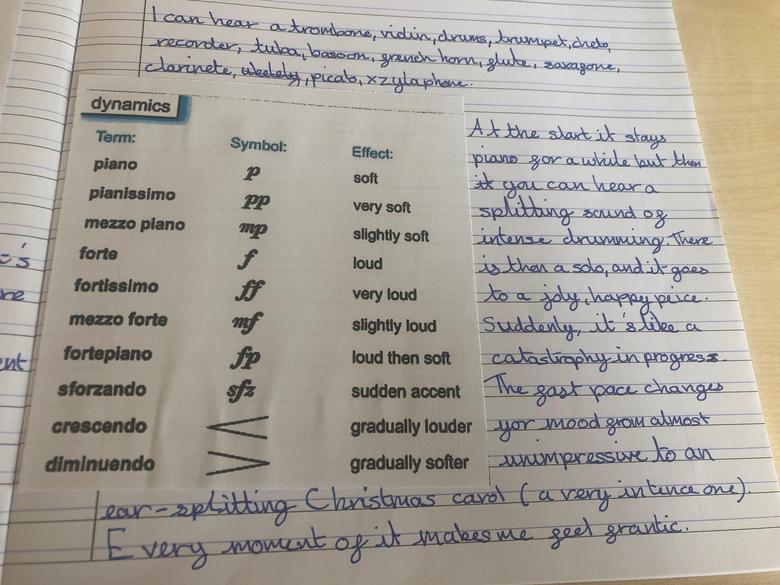 This week we will be listening a piece of music by Vivaldi throughout the school.  We'll be learning a little bit about Vivaldi, and why he was called the Red Priest.  We'll also be thinking about some musical terms to describe the music we hear.  Scroll down below the youtube clip to find a sound link that tells you about the life of Vivaldi.

For more information about Vivaldi, click here...
YEAR 6 RESIDENTIAL
Well, they've arrived.  Year Sixes waved goodbye to an adoring crowd as they prepared to set sail for a week of adventure.  We will report more as we get it.  Look out for more photos and information on twitter! 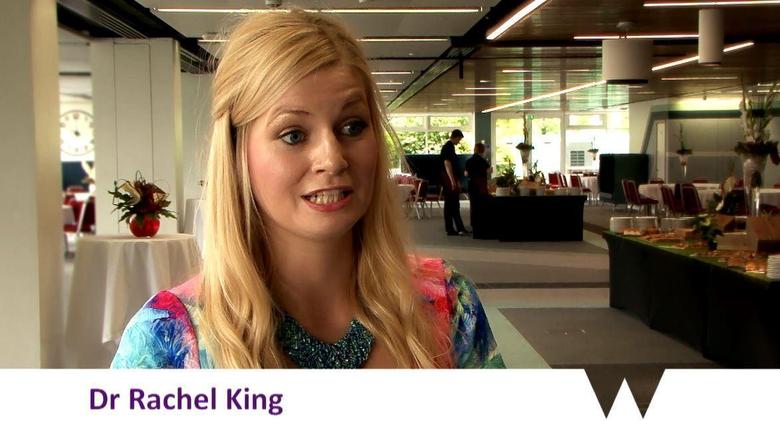 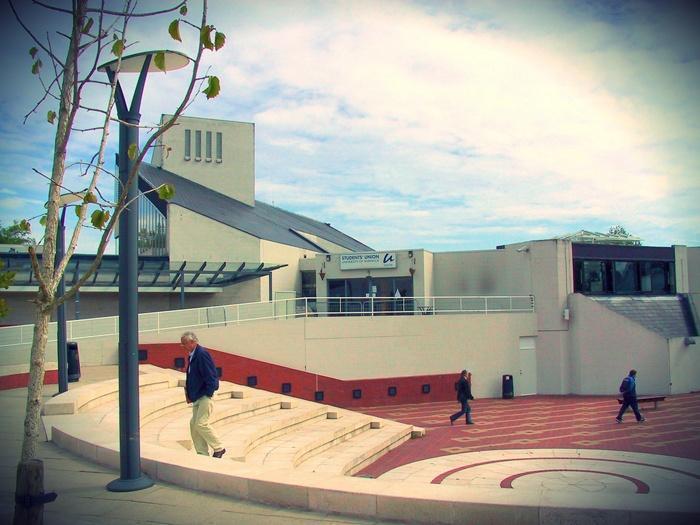 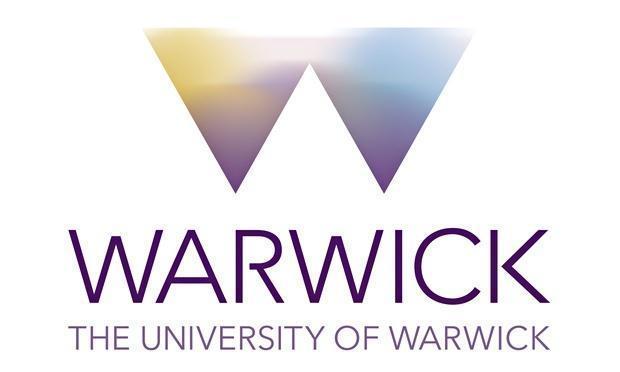 We are thrilled to be working alongside Dr Rachel Turner-King who leads the Drama Masters in Education at Warwick University Warwick Institute of Education.

This is a very exciting link that will allow our pupils to visit the university and learn and develop their drama skills alongside the masters students.  The sessions will lead to cross curricular learning that will further envliven some of their classroom learning.

Learning for a purpose is a successful way of engaging children in their learning, especially when the topic is inspiring and carries them on a journey of imagination.

On Monday 25th February, sixty pirates took over Year 2, holding the headteacher to ransom and sailing through maths problems at a dangerously clever pace.  Pirate Iguanas and Dolphins were furious when they discovered that golden chocolate coins had been removed from their classroom by the headteacher Mrs Herrero.  The sly headteacher claimed that this was because her teachers had been working hard and felt that they deserved the chocolates more than the children.

Being pirates, they decided to solve this problem through mischief.  So they kidnapped Mrs Campion from the office, demanding that if Mrs Herrero wanted Mrs Campion back, they must get their coins back.  Mrs Herrero explained that they worked out a maths problem and gave her a special code and then she would return the coins, but only if Mrs Campion was given back first.  Because Mrs Herrero was angry at the way Mrs Campion had been tied up, she demanded that the maths code was given to her in Spanish.

It must be said that Captain Davis and Captain Irving were the ringleaders of all of this chaos. 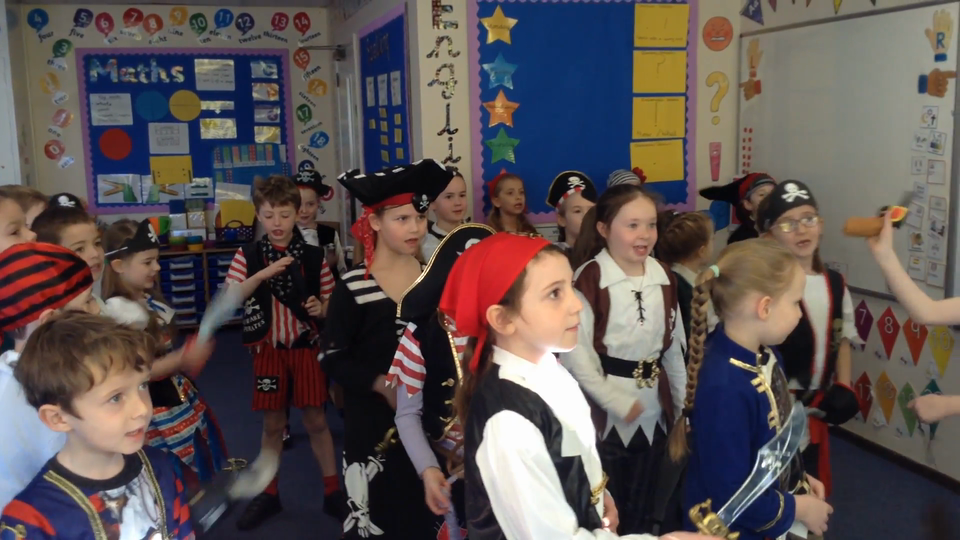 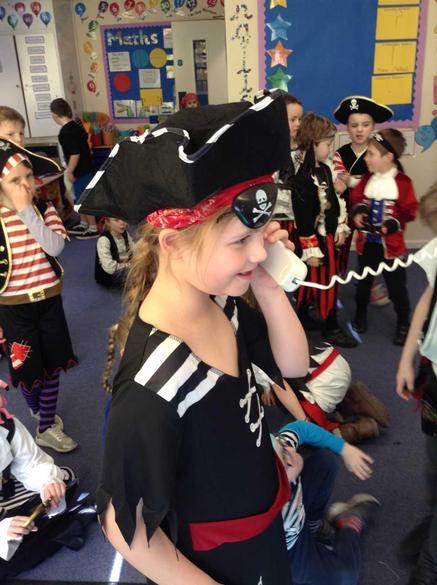 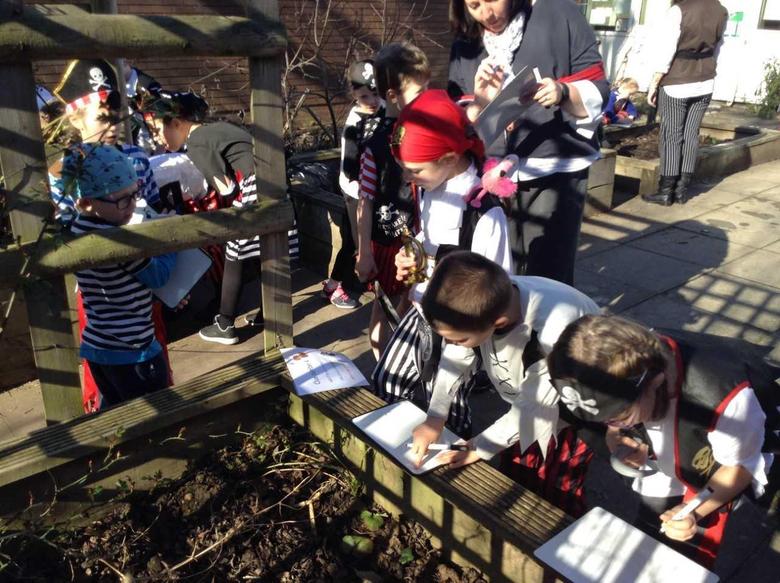 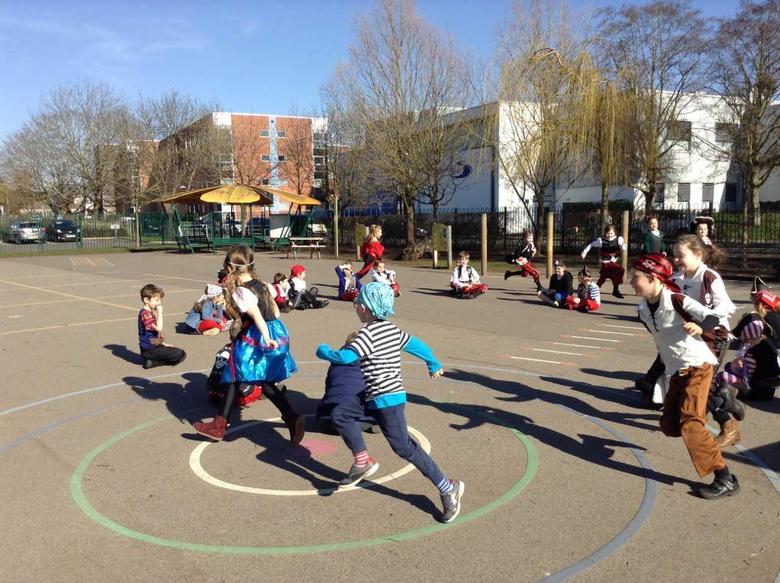 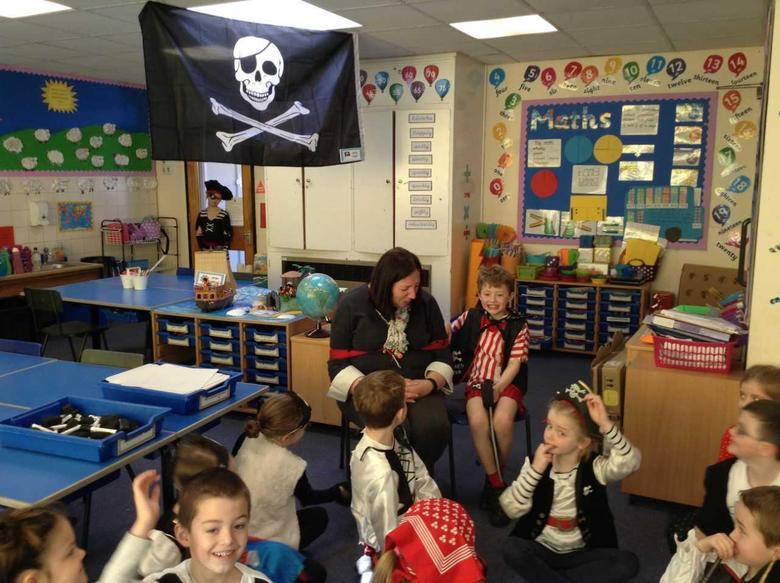 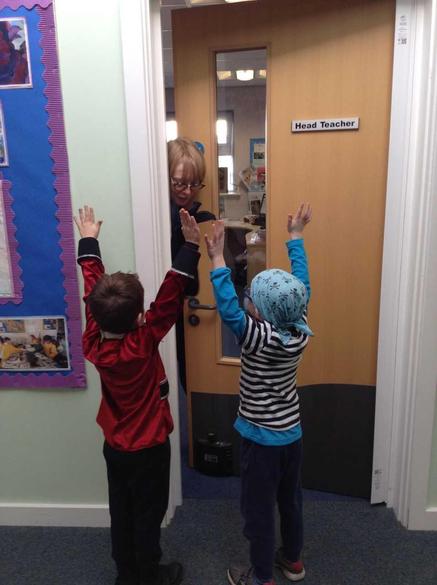 Over the last term, Year 2 have been studying the subject of castles and this has taken them in multiple directions.  They have produced some very entertaining writing, based on the tale of Sir Scallywag and as well as this fictional focus, they have also written letters to Harry and Meghan, the Duke and Duchess of Sussex.

Linking with their technology objectives, and spatial awareness in maths, children were also taked with the challenge of creating a castle using only 8 biscuits, joining this together with the correct consistency of icing.

Their long awaited trip takes place on Thursday.  There will be further trip updates following the event. 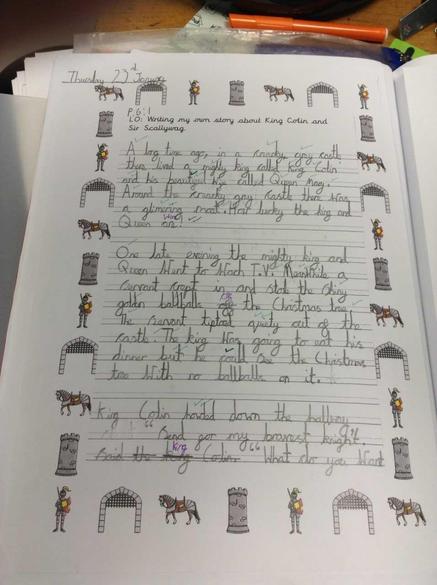 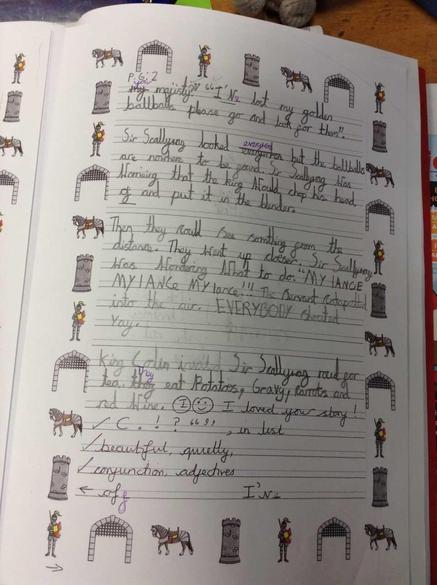 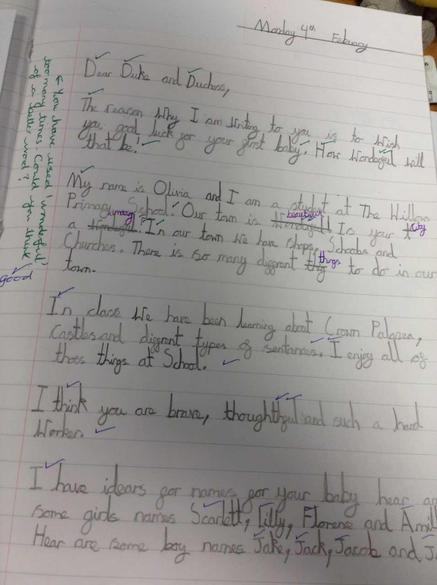 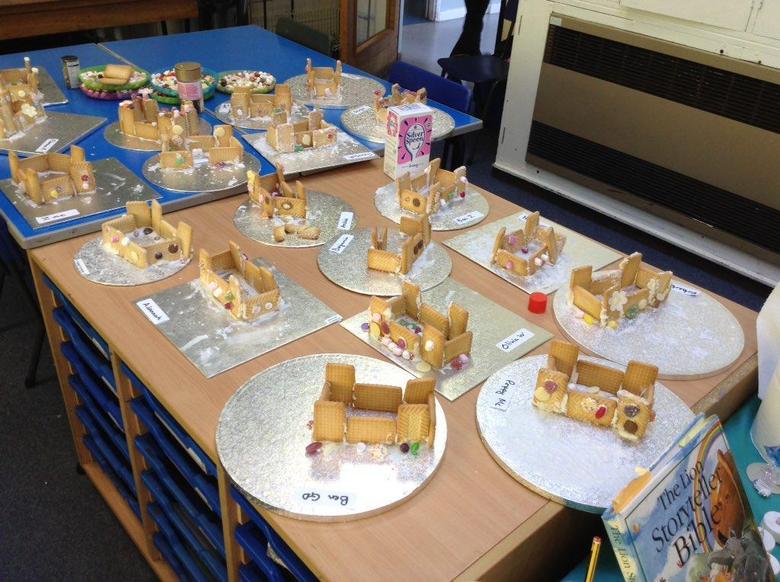 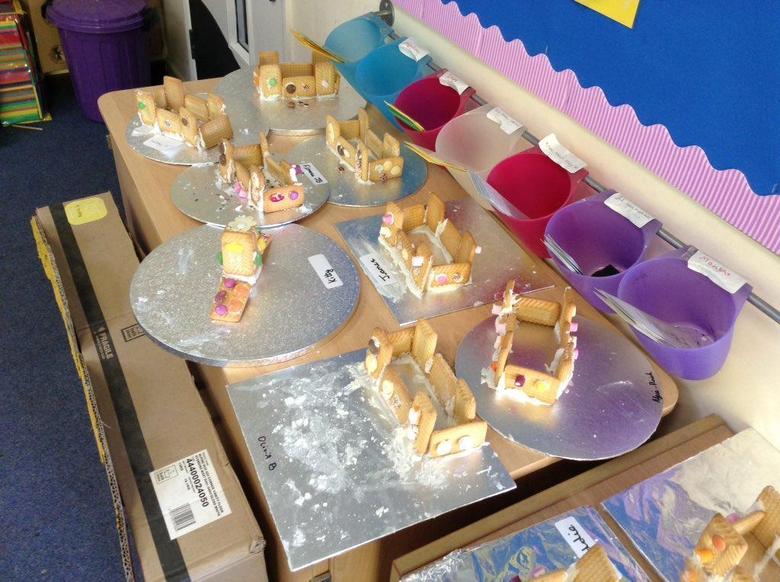 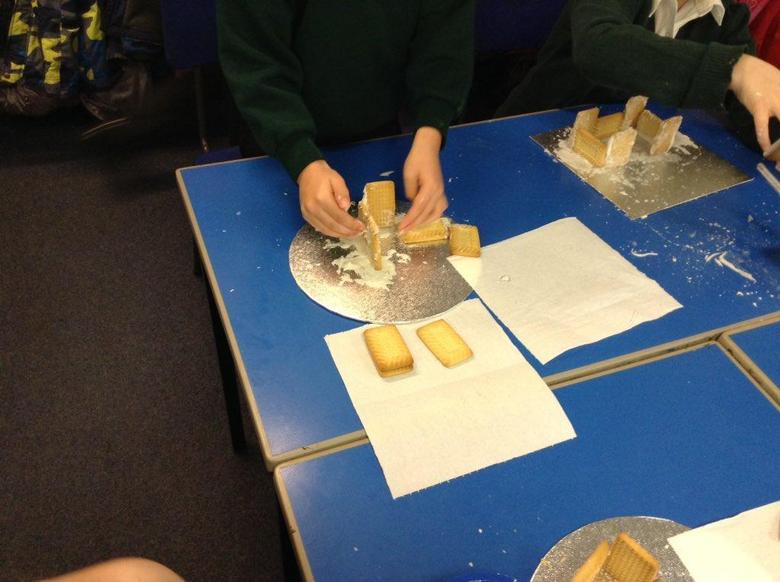